Showing posts from July, 2014
Show all

Shocking: marauding separatists show off the loot from victims of MH17

The horrific downing of MH17 sent shock waves all over the world. Devastated families and worldwide communities were stunned by such a massive, senseless loss of innocents. This grief, however, was not universal.

Separatists, whose voices can be heard laughing and happily exclaiming that the shot down plane was burning up “so beautifully,” shamelessly looted the crash site. Some were so devoid of decency, as to boast about stolen items in social media postings. Such is the case of the now infamous “mascara girl,” Ekaterina Parhomenko of Torez, Ukraine.
The world is still reeling from the devastating loss of nearly 300 lives aboard the downed Malaysia Airlines flight MH17, bristling at the inhumane way with which the bodies of the deceased have been handled. Terrorists and separatists, controlling access to the site, continue to exhibit utter lack of decency that shocks the conscience.

Putin’s house of cards continues to fall apart, one Joker at a time. The West assumes that the game of strip poker will eventually shame Russia into curtailing its activities, failing to realize that Emperor Putin is a nudist. Like any good Chekist, he is largely devoid of shame or conscience. Russia cannot be understood according to the Western system of values, for it does not seek to be liked, trusted or respected. Putin’s Russia wants only to be feared.

The West is likewise incorrect in assuming that the majority of Russians are zombified into supporting aggression against Ukraine. Many of them fully realize that Russian mainstream media is broadcasting blatant lies. They’re willing to reiterate and disseminate deliberately false statements in a misguided belief that in doing so, they’re helping Mother Russia to counter Western propaganda.

The Red Cross has made a confidential legal assessment that Ukraine is officially in a war. This determination opens the door to possible war c…
Read more 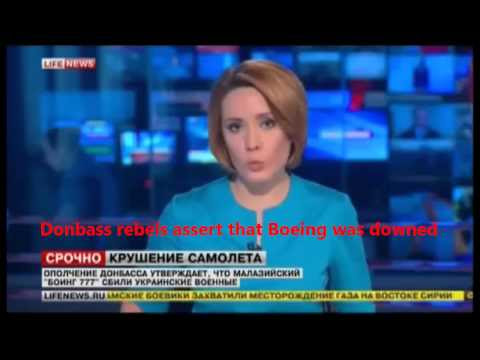 The tragic downing of a Malaysian passenger plane sent Putin’s elaborate propaganda machine into overdrive, ultimately causing it to unravel. The evidence points overwhelmingly at the terrorists, whose leaders are Russian citizens, current and former members of the Russian armed forces and FSB.
In the past, their presence on the frontlines alongside the terrorists in Ukraine provided valuable advantage to the Russian media outlets. They were typically the first on the scene, filming the footage that would be shown on Russian television in short order. This powerful sword of immediate access to live events finally cut the other way on July 17, 2014. Russian media and the terrorists themselves were caught red-handed in making numerous misrepresentations and outright fabrications, intended to override their own previous admissions.

Here is a collection of the most outrageous lies with respect to the shooting down of the Malaysia airliner.
Continue reading: http://www.examiner.com/list/rus…
Read more

Just when it seemed that Russia’s mainstream media couldn’t possibly stoop any lower, propagandists have outdone themselves yet again. On July 12, 2014 Russia’s Channel One ran a horrific story of an alleged baby crucifixion in Ukraine.

The only “witness” to the alleged mind-numbing public execution is Galyna Pyshniak, who was interviewed in Russia. Her breathless story included the following claims: “Center of the city. Lenin square. Our Gorispolkom is the only square where you could herd all the people. They gathered women, because there are no more men. Women, girls, old people. It was called a show execution. They took a child, 3 years old, a little boy. He was wearing little briefs and a T-shirt and they nailed him, like Jesus, to the bulletin board. One of them was nailing him, while two others held him in place. They were holding the mother. Mother watched her child bleeding. There were screams. Shrieking. They also cut the child’s body, so he would suffer more. It was impossi…
Read more

Russia’s aggressive disinformation campaign about recent events in Ukraine reached epic proportions. For example, Alexander Skryabin (who died of cancer in 2011) was revived by the Russian mainstream media to commit not one, but two sets of separate terrorist acts in Ukraine. Even after this fabrication was exposed, only Russia Today removed the article and published a retraction.

It should be noted that Russia’s information war is waged not only through its mainstream media. Years ago, Kremlin recognized the power of social media and decided to exploit it. Government-funded campaigns include expatriate Russian bloggers in Germany, India, and Thailand. American conservative bloggers were also paid to write pro-Yanukovych stories, denouncing the Ukrainian revolution and spreading falsehoods about “fascists and Nazis” allegedly controlling the new government of Ukraine.

Russia’s media caught red-handed in another fabrication about Ukraine

Russia’s propaganda war stooped to unimaginable lows with respect to its coverage of the events in Ukraine. Russian media used images and videos from Syria, Chechnya, Dagestan, Kabardino-Balkaria, Bosnia, India, China and Australia to illustrate alleged atrocities of the Ukrainian government. It claimed that Ukraine no longer exists as a country (including statements to this effect by the head of Russia Today (RT) Margarita Simonyan), labeling its territory as mystical “Novorussia.” It declared Ukrainian people to be the “occupants” on their own land and actively recruited mercenaries to fight against the military of Ukraine.

Russian mainstream media shamelessly claimed that Ukrainian military “harvests organs” from living people, that Ukrainian government is building “concentration camps” and imprisoning all healthy males on the territories that have been recently freed from Russia-sponsored terrorist/separatist forces.

This information is also being actively disseminated by Russia’…
Read more